The Stigma of Glasses

This morning I read the story of the fox meteorologist Jessica Starr who committed suicide after having lasix "smile" surgery. She was apparently having a difficult time with her recovery and this is not uncommon with people that elect to have this procedure. It is an incredibly sad thing when someone commits suicide and the reasons are complex.

What I want to talk about is why we have such a stigma surrounding the wearing of eyeglasses. Ms. Starr like many people had worn contacts for years and decided to take the risk of having this surgery to not have to wear them. She was having great difficulty with dryness, pain and loss of vision well after a month of having the surgery. My guess is she was also tired of the routine of putting plastic discs on her eyeballs everyday so she could see. Why not just wear glasses? Can you name any TV news personality that wears glasses, especially a woman?

I never have and never will wear contacts. I can't stand anything touching my eyeballs. Some people say you get used to them. Fuck that. Ms. Starr clearly needed to be glasses free and have perfect eyesight for her job. I am really dumbfounded at the way eyeglasses are looked at by Americans.
It's like we let the bullies who call us four-eyes control our lives. Personally, I think glasses make women look attractive. Janet is getting glasses soon and I can not wait. One, because then she will be able to see much better and two, now I have another glasses buddy.

Do not let others impose their standards of beauty on you. Do not undergo dangerous and life threatening procedures for cosmetic purposes. And if you are thinking of harming yourself or someone else please talk to someone.
Posted by zomatic1 at 2:08 PM 4 comments:

One day last summer while walking down our street with our dog Abel, I passed a guy working on his truck. Everybody has a truck. It's like it's expected. If you really got it going on you've got a monster truck with big fat tires. When I greeted him with a "how ya doin'" he replied, "Another day in paradise." 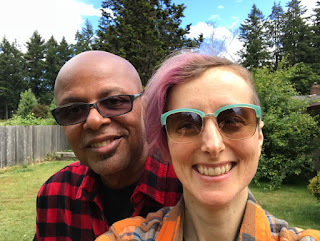 Two years ago today we left Chicago. Having only 5 weeks to pack, ship and mostly give away all of our worldly possessions, we set out for Olympia Washington at around 4pm. That was a mistake that could have ended tragically. It took way longer to load the van and clean the house than we expected, so there was no way we could have gotten to Sioux Falls South Dakota by any decent hour. We should have adjusted our plan and stopped at a hotel somewhere in between and cancelled the previous reservations. Instead we tried to power through it while running on fumes.

I'm not a follower of any organized religion but I do believe that we have angels that watch over us. That was the only way we didn't wind up wrecked on the side of some foggy deserted road in South Dakota.

Now, two years later, Odie, Lily and Herbie are all angel dogs. Thankfully all the cats are still here.
We have 3 beagles, Abel, Izzy & Daisy that were all rescued from pharmaceutical lab testing by The Kindness Ranch in Wyoming. Janet & I have gone through some health challenges. Everyday we feel thankful and blessed when we wake up in this libertarian paradise with it's monster trucks, weed stores and drive thru coffee shops with ladies in their underwear making espressos and say, another day in paradise.

This past Saturday The Olympia Comics Festival was held in beautiful downtown Olympia Washington. I was fortunate enough to be among the comic creators featured at the event. This was my second year setting up there and it has become the only comic show that I do as a creator. I plan on going to Emerald City at some point but only as a fan.

This year, I had no expectations. I don't have a new book (I'm working on a mini comic about one of the minor characters in Ninja Bunny Assassin and his story, but it's not finished) so I was a bit anxious about doing the show.

I loaded everything in the van Thursday night and decided Friday would be a day that I'd use to just chill and draw a bit and try to prepare mentally. Got there a little less than an hour before doors opened. Set up was easy since I was going for a low key approach. only a hand full of pins made the cut since this show is all about the comics.

Once people began to arrive, I was excited and nervous at the same time. I've done many shows & cons in the past but I still get nervous every time. Like a stage performer before the play or a ballplayer before the big game.

By the time it was over, I had experienced possibly the most enjoyable time I've ever had behind a table selling my comics. Not only were my sales double what they were last year, but I met some of the nicest people.

Frank and Casey of Danger Room Comics put together this festival which is the longest running  indie comics event in the Pacific Northwest. Since 2001 they have been bringing together some of the best talent in the medium which includes a guest of honor list that reads like a who's who in Indie comics. This year Farel Dalrymple and Shannon Wheeler did the honors.

There's a feeling you have after a comic show where you feel energized and inspired. Like yeah that was so cool being around like minded people. I'm rockin' that feeling now.
Posted by zomatic1 at 6:53 PM No comments:

Billy Ireland Cartoon Library and Museum is a National Treasure

In July of 2015 my friend Michael & I drove to Columbus Ohio for the annual SPACE comic show. With SPACE happening this weekend, I'm reminded of that last trip which featured an unexpected bonus.

The show posted on it's Facebook page that there was to be a free tour of the Billy Ireland Cartoon Museum at 3pm. Since I've never left on a road trip on time, we of course were running late plus we ran into awful construction delays on I-94.

When we finally got to The Ohio State University campus and found the museum it was well after 3. We had failed. We'll never get to see this hidden wonder.

Then, after getting lost inside the building which is impressively large, we found some staff who informed us that there was another tour happening when this one finishes! Great success! When the first tour finishes we see a ton of SPACE exhibitors all of whom were on time for the 3pm tour.

We were the only two people that showed up for the 4:00 tour.

The person giving the tours that day was associate curator and professor Caitlin McGurk. She could have easily said, sorry fellas I just did your tour and you missed it. Hell, I wouldn't have blamed her. It was Friday afternoon, most folks are already starting their weekend.

Ms. McGurk smiled, introduced herself and began a tour that Michael and I will never forget.

We started with the public exhibits like original art pages from Gene Colan, Frank Miller, Walt Kelly, and many others. 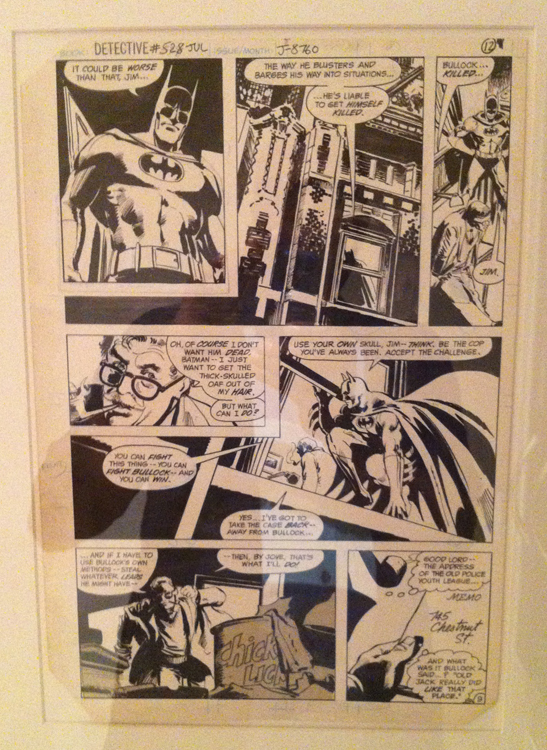 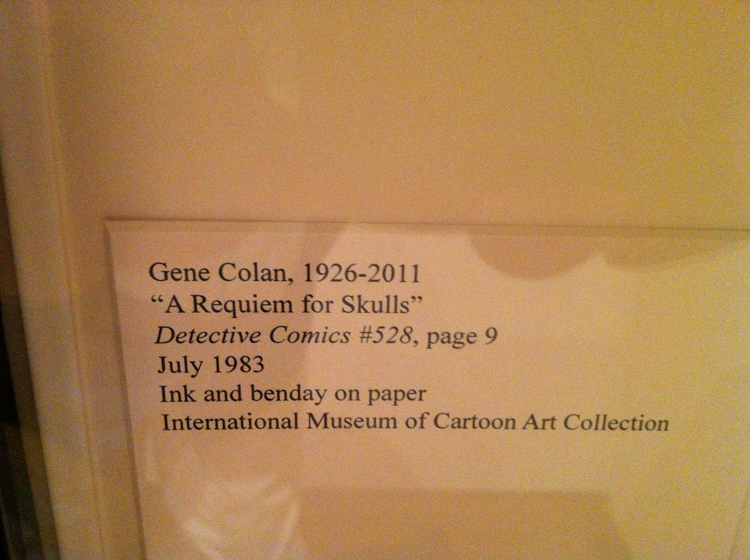 There is a lot of Milton Caniff's work because it was his donation of his artwork and papers that was the genesis of the museum. Mort Walker and Bill Blackbeard also made huge contributions to the institution. 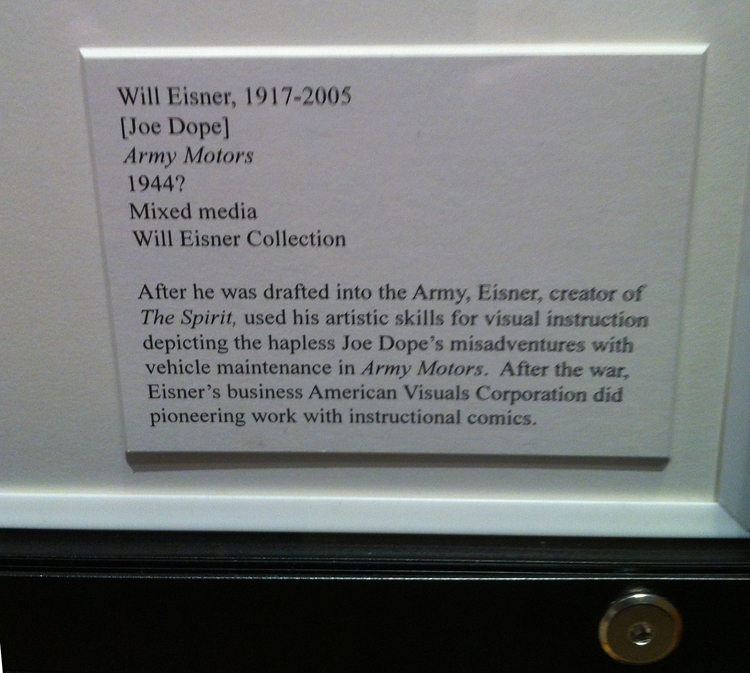 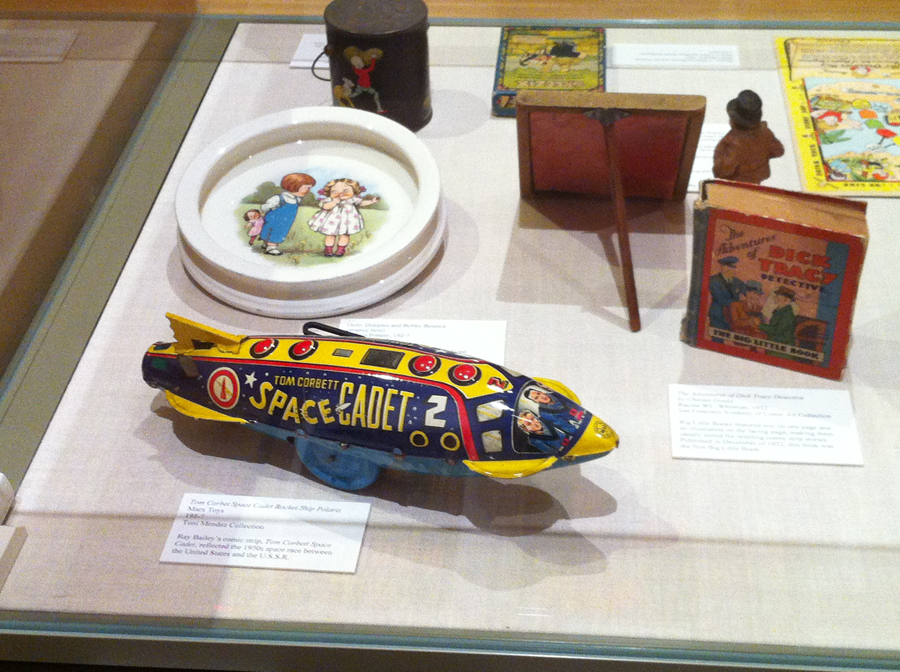 Then we went behind the scenes into the archive which are massive. The cold storage available is really stunning. I literally remember how cold it was in there. The Blackbeard collection is constantly being cataloged and consists of 75 tons of material. 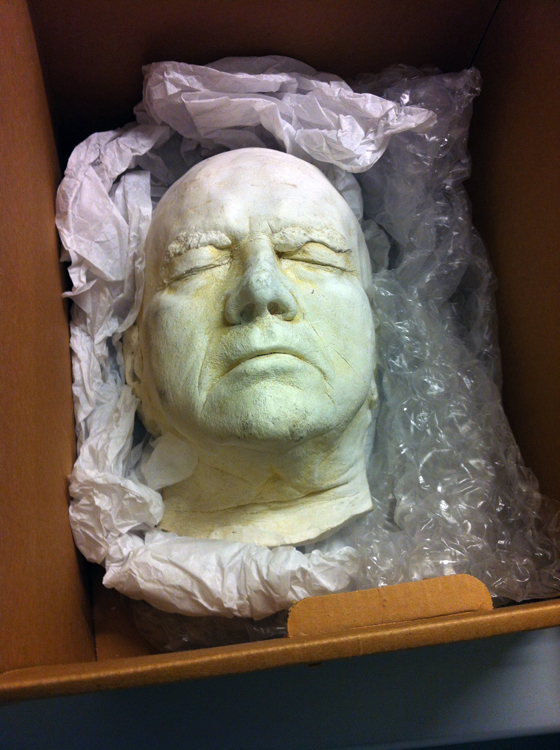 One of the strangest things in the archives is a death mask of Milton Caniff. It reminded me of a John Dillinger death mask that I shipped for somebody when I worked at the UPS store.

That was a great experience and probably my only chance I'll get to see the place since I don't see myself back in the Midwest anytime soon which makes it even more special.

Thanks again Caitlin. You are doing the lord's work making sure that these wonderful creations will be preserved for generations to come.

So I’m going through my short boxes (which are the only size I use now since long boxes are an abomination) and reading all the comics that I’m behind on. I’m talking years worth of issues. I kept buying but I stopped reading. Mostly because of time restraints. Only so many hours in a day.

And just for shits and giggles I’ll be making short video reviews of the books as I finish them and posting them on YouTube. The latest one is Incognegro by Mat Williams & Warren Pleece.

So our blog just vanished. The only remnants are stray jpegs that pop up when I google my name. When I search for the blog name you get nothing. I looked online and saw other similar stories. None of those people were able to retrieve their posts so I hold out little hope for mine.

I suppose that's what I deserve since I hadn't posted anything in weeks. I just assumed it would always be there. The folders on my hard drive that are supposed to contain the backup files are empty. Eight years of blogs all vaporized. Oh well.

This is another lesson in letting go. When we moved across the country after getting rid of 90% of our belongings that was part of it. Sure there were a lot of memories in those pages but the memories still exist in my head even if they're a little foggy.

Besides, now this gives me a do over. All that stuff I said before can't be proven because it doesn't exist!

And here's a photo of our dogs for no reason other that we love them so much. 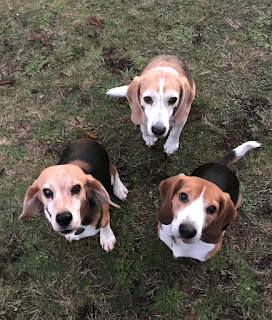